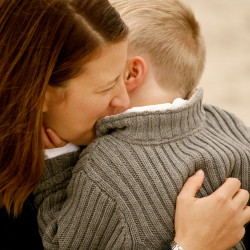 I went away on vacation last week and I had some time to reflect on my life and I felt inspired to share a more personal story for this week’s blog post.  Not many people know all the details of my son’s story and I can probably count them all on one hand.  My journey to understand my son’s food allergies is complicated.  Instead of a straight path to a diagnosis, it was a winding trail of doctors meetings, online research, questioning my instincts, debating his often ambiguous symptoms, and mounds of frustration.  Today, I feel like I have his symptoms under control, but we lack a definitive diagnosis.

Unlike other food allergies, the symptoms of a wheat sensitivity, allergy or celiac disease are gray and less obvious.  This becomes far more difficult when you are dealing with a young child who may not be able to verbalize how he feels.  At this point, my son has not been diagnosed with having celiac disease nor has he had a concrete diagnosis as having a wheat allergy based on a blood test.  However, there is no doubt in my mind that his body cannot handle gluten and I will explain why.  I will also explain why, at this point, finding a concrete diagnosis is not something we plan on doing.

My son came into this world in a hurry.  For a first pregnancy, my labor was relatively short and he was born full-term, at a healthy weight.  He was beautiful and I loved him with my whole heart immediately.  However, our first few days in the hospital were intense.  He struggled to gain weight and I struggled, as many new moms do, to breastfeed, but I was determined to make it work.  He finally gained back 50 g (yes, that’s grams) after losing way too much, which gave us the ok to take him home with the condition that we were to see his pediatrician immediately for weight checks.

The next 3 months were a blur.  We took him in regularly for weight checks and he managed to put on weight little by little.  The real blur came from the lack of sleep.  He cried endlessly, all night, and he nursed constantly.  I used to say that I spent my day and night trying to get him to stop crying.  On top of that, he started developing severe eczema, to the point of bleeding.

In my head I thought, ok, he’s a little colicky, skinny maybe because I don’t produce enough milk and he got a rough start, and it was winter so he has sensitive skin like me.  The first few months were hard, but none of the concerns my son faced caused me to consider anything other than, he’s just a tough baby and all this is normal.

After 3 months, we had more smiles than cries.  By, one year, he was a very happy and laid back toddler.  However, he was a skinny kid, constantly in the 5th percentile for weight.  Eating was a struggle.  He was never a kid who would eat much in a sitting and I tried every technique imaginable to get him to eat.  Maybe he would eat grapes cut this way or maybe he’ll like soup or maybe if I try 6 mini meals…  It was an endless job trying to figure out how to put weight on this kid.  Also, his eczema continued to be an issue.  Its severity would come and go in waves, but it was a constant.

Another event started occurring regularly around 1.5 years.  He started having tantrums that ended with him turning blue and occasionally passing out.  The first time it happened was one of the scariest moments of my life.  We called 911 immediately and he came to very quickly.  Our pediatrician told us that a lot of kids do this and it wasn’t a big deal.  My son didn’t tantrum often, but this kind of tantrum was different.  It was usually over something minor, such as wanting something he couldn’t have.  He would escalate into this tantrum state in seconds and turn blue and pass out.  It wasn’t something he could control.  It never happened over a long blown out tantrum and it happened a couple times a month.

By this point I thought, he’s just a skinny kid by nature.  A lot of toddlers are picky eaters.  The pediatrician is not concerned as long as the trend is gaining weight even if it is only a little each check-in.  He just has sensitive skin, a lot of kids have eczema.  My pediatrician told me that kids sometimes have intense tantrums and pass out, he’s just one of those kids.  Again, I dealt with all of these concerns as within the normal range of toddler issues and it never struck me as anything else worth pursuing.  He was happy, very smart and energetic.

However, right before his third birthday, a change happened. Initially, the changes I saw were only things a mother’s intuition would notice.  He seemed less focused, it became more difficult for him to sit and do an activity.  Prior to these changes, he loved doing puzzles.  It became harder and harder for him to sit through a puzzle or book.  He also began having episodes of hyperactivity throughout the day.  All of these behavior changes were difficult to notice and explain.  He didn’t do it all the time and, in general, he was still a very laid back, mellow kid.

We potty trained my son a few months before he turned 3.  It went pretty smoothly at first and though he did have accidents a few times a week, we knew boys could be more challenging in the potty department.  However, as time went on, the accidents continued to a point that they were a daily occurrence, months after we potty trained.  His accidents were mostly due to not being aware enough to go and he seemed unphased by them.

I brought all of these concerns to our pediatrician on 3 separate occasions over a few months.  Each time, I was told, “he’s 3, this is all normal, try not to get stressed about it”.  However, deep within my mommy intuition, I knew something else was going on.

I started doing research on-line and putting together all the pieces of my son’s symptoms since birth.  I thought maybe this could be a virus or maybe he’s just tired.  My son had never been a stellar sleeper.  Around 3 we had given up on naps because he resisted them so much.  Maybe we can try harder to get him to nap?  I also started looking at nutrition.  Maybe because he is such a poor eater, he isn’t getting all the nutrition he needs?

Finally, after posting questions on my local moms club forum (can’t say how grateful I am for those forums and moms who respond), I was recommended a local doctor focused on natural healing through nutrition.  I remember calling my mom to tell her about our upcoming appointment and I remember her saying, “I wonder if they will take him off wheat”.  In my head I was thinking…I really hope not.

After our first appointment and evaluation, I was given homework.  Take my son off gluten for 1 week, see what happens, and report back.  The results were astonishing.  The potty training issues and behavioral issues resolved after 24 hours.  His skin started clearing up and he was eczema free a few months later.  After 6 months and up to now, he is in the 50th percentile for weight.  Since going off gluten, he has never had an intense tantrum causing him to turn blue.  He is a happy, healthy, beautiful, incredibly smart 4.5 year old.

Looking back and writing about this journey is therapeutic.  During the whole process I constantly questioned my gut instincts.  Was I over reacting to symptoms?  Was I being one of those crazy moms?  My answer is no.  I am so thankful I didn’t sit back and let gluten destroy my son longer than it did.  I am also so thankful for the doctor who could see beyond conventional medicine and know that diet could be the factor impacting my son.

So what now?  Would it be helpful to know for sure that my son could have celiac disease or even a wheat sensitivity?  My husband and I have decided to wait.  The reason is that all that testing, regardless of the outcome, would not change excluding gluten from my son’s diet.  Also, the testing is not always conclusive and can be rigorous.  Many people test negative for celiac, but have the same symptoms.  It may also involve reintroducing wheat in his diet for an extended amount of time to get an accurate result.

My son is also too young to understand and verbalize how he feels if we decided to give gluten another try.  So our decision is to wait until he is old enough to understand what gluten is and how it impacts his body.  I want him to be able to decide.

Until then, here I am.  I am a mommy who loves to cook and wants to make my son’s gluten-free life as happy and fulfilling as any other child.  I also hope our story resonates with others and I can do my part to help someone else, in the same way that so many people have helped me.  Thank you for sharing my story.

Featuring Top 3/3 of Our Story